Our institute is equipped with a modern computer cluster. Its main duty is to speed up computer-demanding methods, such as the 3D asteroid modelling technique developed by dr P. Bartczak and its group. In its first version, it consisted of two servers and 15 workstations, working in a LAN network with 1 GB/s capacity. Each workstation is equipped with a six core AMD processor, with 3.2 GHz and 4GB RAM, as well as a Nvidia Gforce GFTX570 graphic card. The latter is exploited with a dedicated software that has been created to perform GPU-accelerated computing. 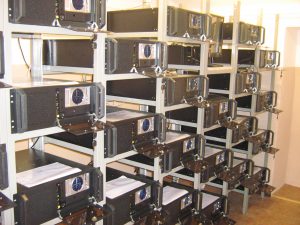 In a second phase, the cluster was upgraded with 10 computers with similar characteristics, but without graphic cards. These computers are devoted to storing and processing data gathered with the ILMT 4.0 m. telescope located in Devasthal, India ( http://www.aeos.ulg.ac.be/LMT/index.php)

Recently, a major upgrade of the cluster has been made, with 65 new computers equipped with six core AMD processors, 3.5 GHz, 4 GB RAM and GTX750Ti graphic cards with 2GB RAM, 640 cores 1 GHz. Additionally, a third server has been acquired, with two SSD 240 GB disks and one HDD disk. In sum, the cluster consists of 80 workstations and 3 servers (excluding computers processing ILMT data), all working with Debian GNU/Linux. It worth noting that the total power consumed when computers work at the maximum capacity reaches 50 kW. As a consequence, the room hosting the cluster has to be continuously cooled.

In the lab students can use 14 PC computers with Intel Core i3 multicore processors and 4Gb RAM. All computers are running Linux. The same type of computer and digital video projector are available for the lecturer. The lab has a fast, gigabyte internet connection.

Students room is a place when students can spend time between classes and eat some small meals. Room is equipped with electric kettle and a microwave owen. Moreover, students can use four PC computers and a printer there.

How to visit us