On the occasion of various interesting astronomical phenomenas and events, the observatory organizes public sky shows. Dates of the shows are announced in the media as well as on this website.

In recent years we organized events related to astronomical phenomena: 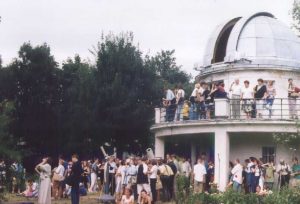 Mars hoax sky gazing was the most successful. During the two nights we were visited by the more than 10,000 people, which – despite the mobilization of additional telescopes – resulted in long queuing to the telescopes.