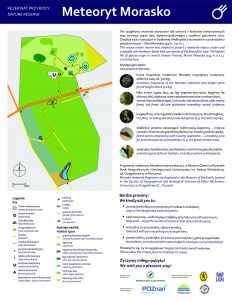 Employees of the Astronomical Observatory in cooperation with the Polish Society for the Protection of Nature “Salamander” prepared an educational path in the “Morasko Meteorite” nature reserve. The foot trail with educational boards leads along three meteorite impact craters caused by a fall of an iron meteorite few thousands years ago.

Asteroid which entered the atmosphere above Poznan few thousands years ago went though fragmentation causing the largest iron meteorite shower in central Europe and created a crater field. First meteorite was discovered here in 1914 and next meteorites are being discovered to date (including in 2012 the discovery of the largest meteorite known in Poland, weighing approximately 261.2 kg).

On the trail you will learn out about:

Getting there: by public transport – bus number 902 from the “os. Sobieskiego” bus station to stop “Morasko rezerwat”.