AMU Astronomical Observatory currently owns three telescopes dedicated for scientific research and has access to the SALT telescope. Several other, smaller telescopes, are utilised for didactic and astronomy popularization purposes.

The photometric telescope, located at Borowiec observing station (near Kórnik) is in operation since 1997. It has been constructed by design for asteroid and variable stars’ photometry. The telescope is a 0.4m f=1.8m Newtonian, equipped with SBIG ST-7 KAF400 CCD with Bessel + C filter set. During construction, the telescope was installed on the paralactic mount of a Coude refractor (150/2250 mm), which has been manufactured by Carl Zeiss in 1970’s (the refractor was previously located at AO AMU site in Poznań, where it was used for astronomical observations). The mount has been modified; e.g. the original tracking mechanism was replaced with two stepper motors to control its motion in hour angle and declination. 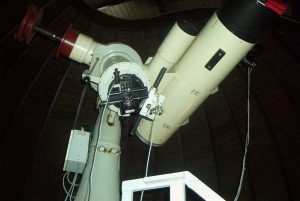 In spite of its localisation in poor astro-climate (up to 100 clear nights/year), the telescope is the most productive instrument at our Observatory, delivering good quality data (noise at the level of several thousandths of magnitude for 15 mag objects).

This telescope was used for long-term study of the binary asteroid 90 Antiope and allowed the discovery of 809 Lundia’s binary nature. Earlier studies with this instrument include, e.g., a complex survey of Flora family asteroids. Currently it is utilised for the photometric observing campaign of slowly rotating asteriods with low amplitudes, which aims at creating 3D models of this large, but usually omitted group of asteroids. The results of this research will allow to reduce the effect of observational selection. The second study that makes use of the data collected with this instrument is asteroid shapes modelling with a variety of techniques (“Smal Bodies: Near and Far” project, under ESA Horizon 2020 programme): http://www.mpe.mpg.de/~tmueller/sbnaf/.

A group of asteroid observers, consisting of AO AMU employees and students, collect data with this instrument. Observations are conducted every clear night, except June and July, when the ecliptic is too low above the horizon, and the nights are very short. In the near future a thorough modernisation of the tracking system and automatisation of the observing process are planned.

At the dawn of XXI century our Observatory entered a new research area – stellar spectroscopy. As a part of these activities, in 2003 the first echelle spectrograph (R=35000) in Poland has been designed and constructed by our engineer Roman Baranowski. Several years later, in 2007, a telescope dedicated for research using this spectrograph was put into operation at Borowiec observing station: Poznan Spectroscopic Telescope (PST1). 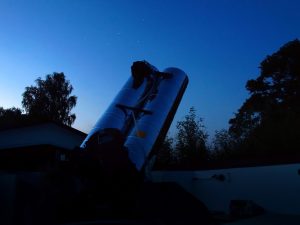 PST1 consists of two twin 0.5m Newtonian telescopes installed on a single, common paralactic fork mount (a modernized German SBG satellite camera mount, originally manufactured in 1970’s by Carl Zeiss Jena, was used for this purpose). One of the optical tubes is equipped with computer controlled FLI focuser, a laboratory Th-Ar calibration lamp, SBIG ST-7 CCD (used for autoguider) and injection unit for 0.05mm optical fiber, transfering light from the telescope to the spectrograph. The second optical tube is adapted for photometry (the study of light variations) and astrometry (the measurements of objects’ positions in the sky) of various celestial objects.

The spectrograph is equipped with an advanced, low-noise Andor iKon CCD camera, cooled down to -75 deg C during observations, which allows obtaining stellar spectra of excellent quality. Spectra obtained with this instrument reveal information on the chemical composition, temperatures, speeds of rotation, radial velocities and other parameters of the stars in our Galaxy. It is the first spectrograph in Poland to observe an extrasolar planet orbiting the star tau Bootis.

PST1 is located at the Borowiec Astrogeodynamic Observatory of the Polish Academy of Sciences. It is a fully remotely controlled instrument. Thanks to a dedicated weather station, all-sky camera and additional monitoring cameras it does not require the presence of any observers on-site.

In 2010 our Observatory obtained funding to build the second telescope dedicated for stellar spectroscopy: Poznan Spectroscopic Telescope 2 (RBT/PST2), which was primarily assembled at our test site in Poznań, and later moved to Winer Observatory w Arizonie, USA. RBT/PST2 is a fully robotic instrument, which performs pre-programmed observations autonomously, with no observer’s supervision. Placing the telescope in the desert, in good astro-climate (~200 clear nights/year) made RBT/PST2 the most efficient observing instrument owned by AO AMU. 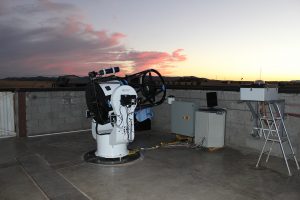 RBT/PST2 is a modern 0.7m telescope of Corrected Dall-Kirkham optical system. Its azimuthal fork direct-drive mount allows slewing up to 15 degrees per second. The optical system allows switching between two Nasmyth foci using a rotating tertiary mirror. Thanks to this solution, it was possible to install various detectors for different observing purposes on one telescope. One of the Nasmyth foci is dedicated for stellar spectroscopy and equipped with a guider camera and optical fiber injection unit, which allows transfering light to an echelle spectrograph (R=40000). The second focus hosts Andor iXon EMCCD camera with FLI photometric filter wheel, used for photometry and astrometry.

RBT/PST2 is primarily dedicated for spectroscopic studies of variable stars (mainly pulsating stars, binaries and multiple systems), however, it is also an excellent tool to acquire data for other projects, such as asteroid shape modelling and orbit determination.

Both PST1 and RBT/PST2 telescopes are managed together as parts of the Global Astrophysical System project.

South African Large Telescope (SALT), located in Karoo desert, 400 km from Cape Town (Republic of South Africa) is one of the largest telescopes on Earth. The 11m primary mirror of SALT is built up of 91 hexagonal segments. A number of institutions from different countries around the world, our Observatory among them, participated in building (and maintaining) SALT. Our contribution allows us to apply for observing time on this instrument. The applicants who acquire observing time on SALT need to provide a detailed observing plan (list of targets, required instrumental setup, times when the targets are available for observations, etc.) via web interface.

Each application (with assigned priority) is then included in a “queue”, which is then used by the telescope’s operator, who picks observing targets from the list when they fulfil all the criteria: visibility in the sky, presence of the Moon (many targets need to be observed on moonless nights), atmospheric conditions (fog, humidity, seeing), etc. It is possible for a high-priority project not to be realized during the whole semester because of unsatisfactory observing conditions.

Telescopes used for education and popularization of astronomy

This is a classical refractor, equipped with achromatic lens (doublet), diameter of 200 mm and focal length of 3000 mm, placed on a German equatorial mount. The telescope was built by German factory Carl Zeiss in Jena, probably around 1909 or 1910. The first user of this telescope was a wealthy amateur astronomer, Wladyslaw Szaniawski, an owner of a manor house in Przegaliny near Lublin, whose dream was to create a professionally equipped astronomical observatory. Unfortunately, the outbreak of the first world war, then the Polish-Soviet war, and a great economic crisis in early twenties prevented him from completion of his plans. In 1929 Professor Jozef Witkowski, a new director of Poznan University Observatory, arranged a donation of a number of astronomical instruments from Przegaliny to Poznan (among them there was a Zeiss refractor mentioned above and precise astronomical Rieffler clock). The telescope was placed in the Observatory’s park, in a new, dedicated dome.

During the interwar period the refractor was extensively used for scientific purposes. The objects studied were asteroids, comets, variable stars and binary stars. The observations were initially performed using a filar micrometer, subsequently replaced by photographic methods. During WWII almost the whole Polish scientific staff was forced to leave the Observatory, but the scientific observations were continued by German astronomers. During that time the original, gravitationally driven sidereal drive of the Zeiss telescope was replaced by electric DC motor controlled by time pulses from a pendulum clock.

After the war, and until early nineties, the telescope was still being used for scientific observations. These were mainly astrophotographic astrometry of asteroids, but attempts were also made of photographic photometry (using an optical microdensitometer), and photoelectric photometry (with a single channel photometer). In 1949 two astronomers from Poznan University Observatory, Jerzy Dobrzycki (later renowned specialist in the history of astronomy) and Andrzej Kwiek dicovered a new asteroid, which was named 1572 Posnania.

Nowadays the old refractor is still fully operational. It is being used for educational purposes (students training) and for popularisation of astronomy (sky shows for school children, during open lectures, the “Researchers Nights”, etc.) 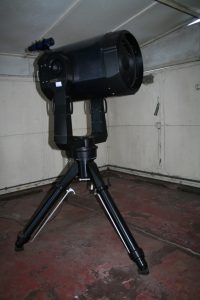 It is a 14″ f/8 (f=2845mm) Ritchey-Chretien telescope manufactured by Meade, dedicated to didactic and astronomy popularisation (star shows). Its azimuthal mount allows automatic pointing at any selected object in the sky. It may be used for both visual observations with eyepieces, as well as a CCD camera. Meade is located inside one of our roll-off roof pavillions, but as a mobile telescope it is also used during star shows in remote locations.

How to visit us